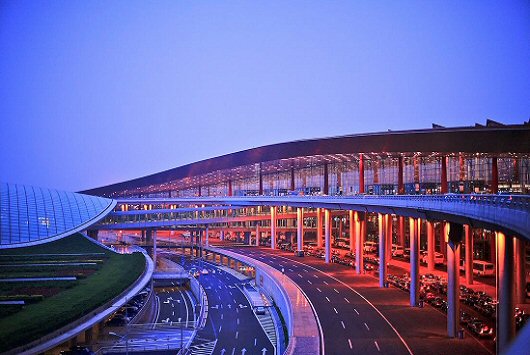 Beijing Capital International Airport is one of the well-known airports in China, serving mainly the city of Beijing. It is situated 32 kilometers northeast of the center of the city, and it has been ranked as the world's second busiest airport in terms of number of passengers since 2010. It is the main base where Air China's launching operations take place together with China Southern Airlines, China Eastern Airlines and Hainan Airlines. The airport also succeeded in becoming the world's 13th busiest airport in terms of cargo.

The airport was built in 1958 AD with one small terminal for passengers. In 1980 AD, Terminal 1, which was larger in size, opened. Later in the same year, Terminal 2 was established and Terminal 1 was closed for improvements. In 2004 AD, Terminal 1 opened again after renovations. The airport witnessed other expansions in the years 2007 and 2008 AD, including the construction of a third runway and the opening of Terminal 3 for the Beijing Olympics and others. Terminal 3 is considered the second busiest terminal in the world since it handled over 100 million passengers in 2018 AD.

Beijing Capital International Airport is composed of three terminals: Terminal 1 for domestic flights operated by Grand China Air, Hainan Airlines, Beijing Capital Airlines and Tianjin Airlines, Terminal 2 serves international and domestic flights for around 35 airlines and Terminal 3, also called Dragon Terminal, manages international and domestic flights for other airlines which are not included in Terminal 1 and 2. Terminals provide various services and facilities for passengers like medical services, currency exchange, an area for food, banks, ATMs, baggage services, free Wi-Fi connection, lounges and a lot more. In addition, you will find several hotels at the airport. Terminal 1 and 2 are close to each other, and thus you can use the walkway that takes from 10 to 15 minutes, but you need to use the free shuttle service to transfer to and from Terminal 3.

Rent a Car in Beijing

More information about Beijing Capital International Airport in Yahoo. Just click on the icon and you can see al the results.